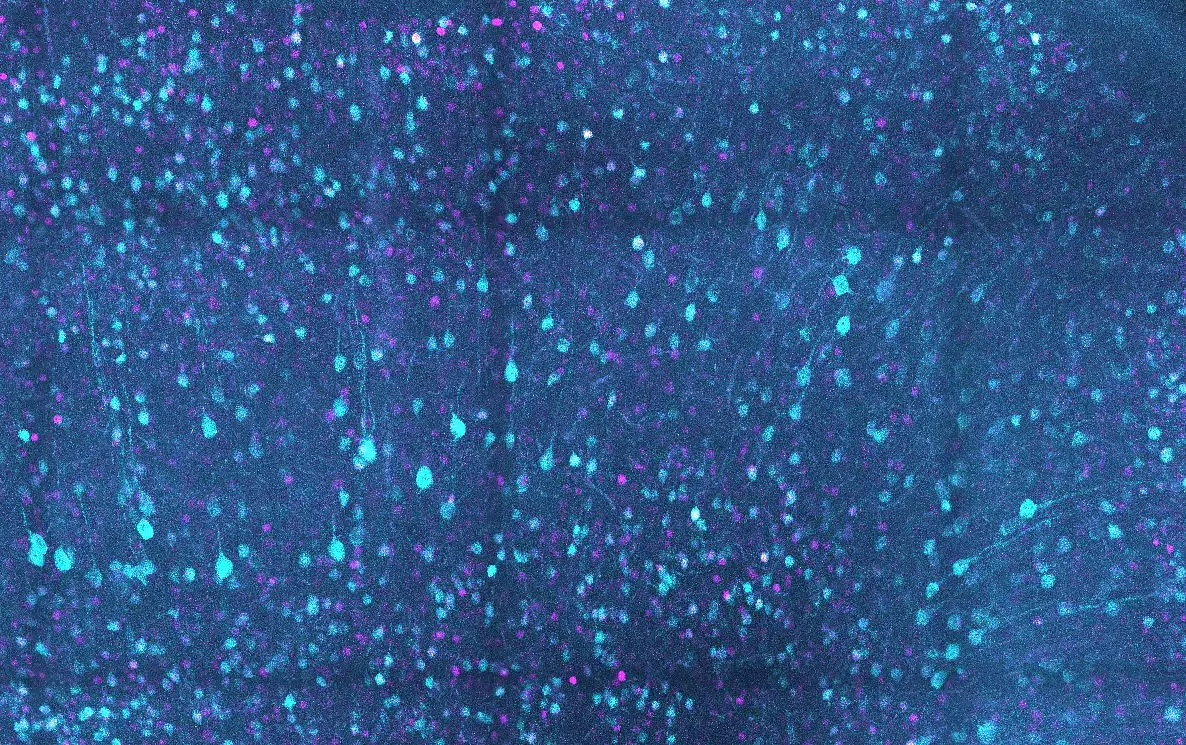 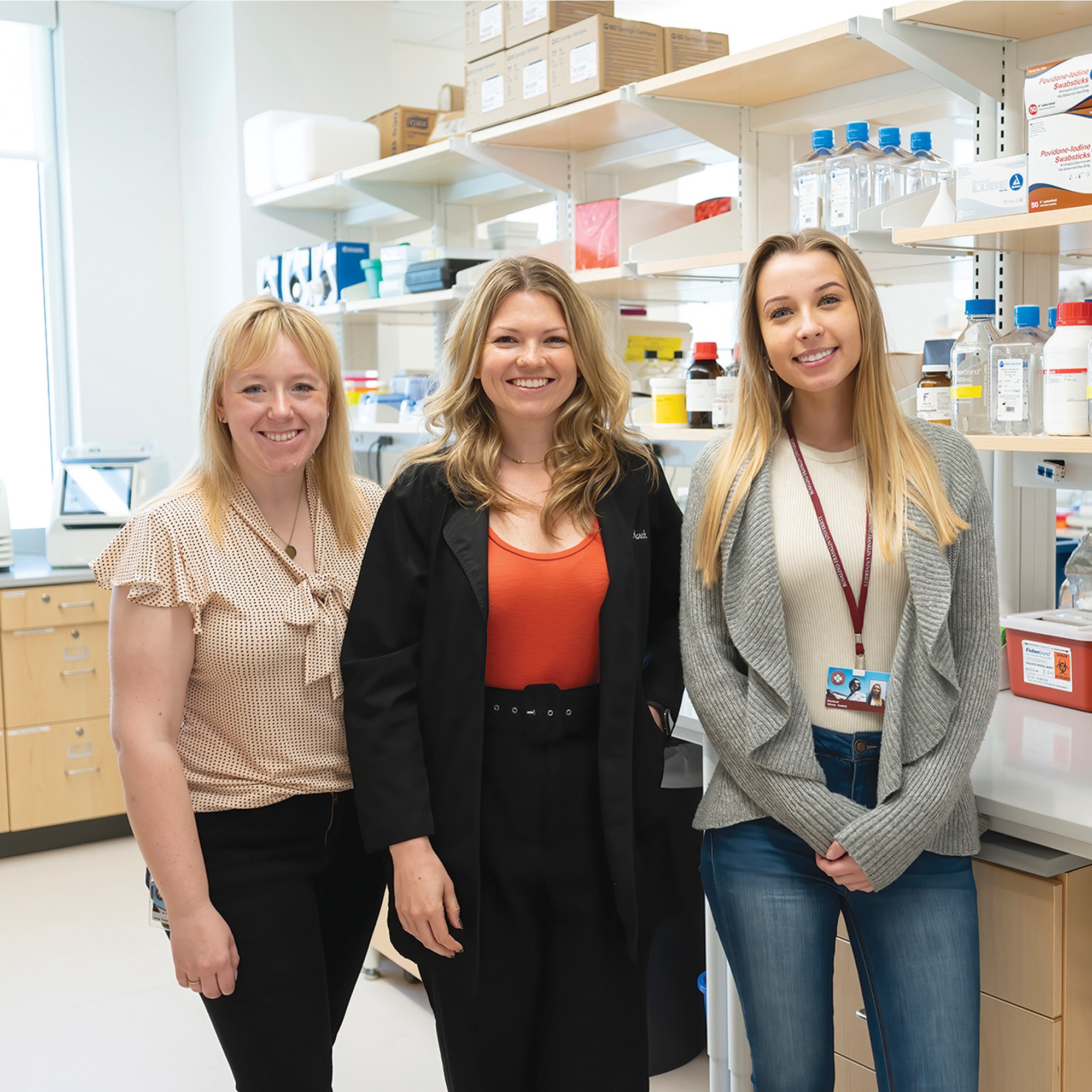 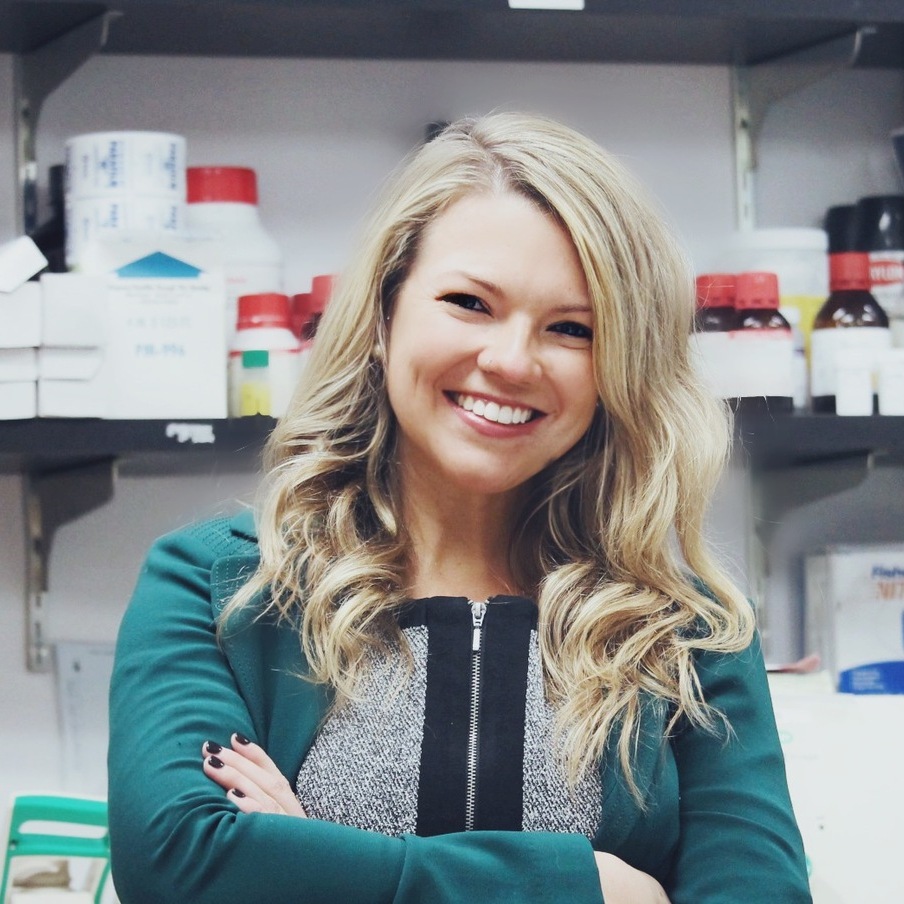 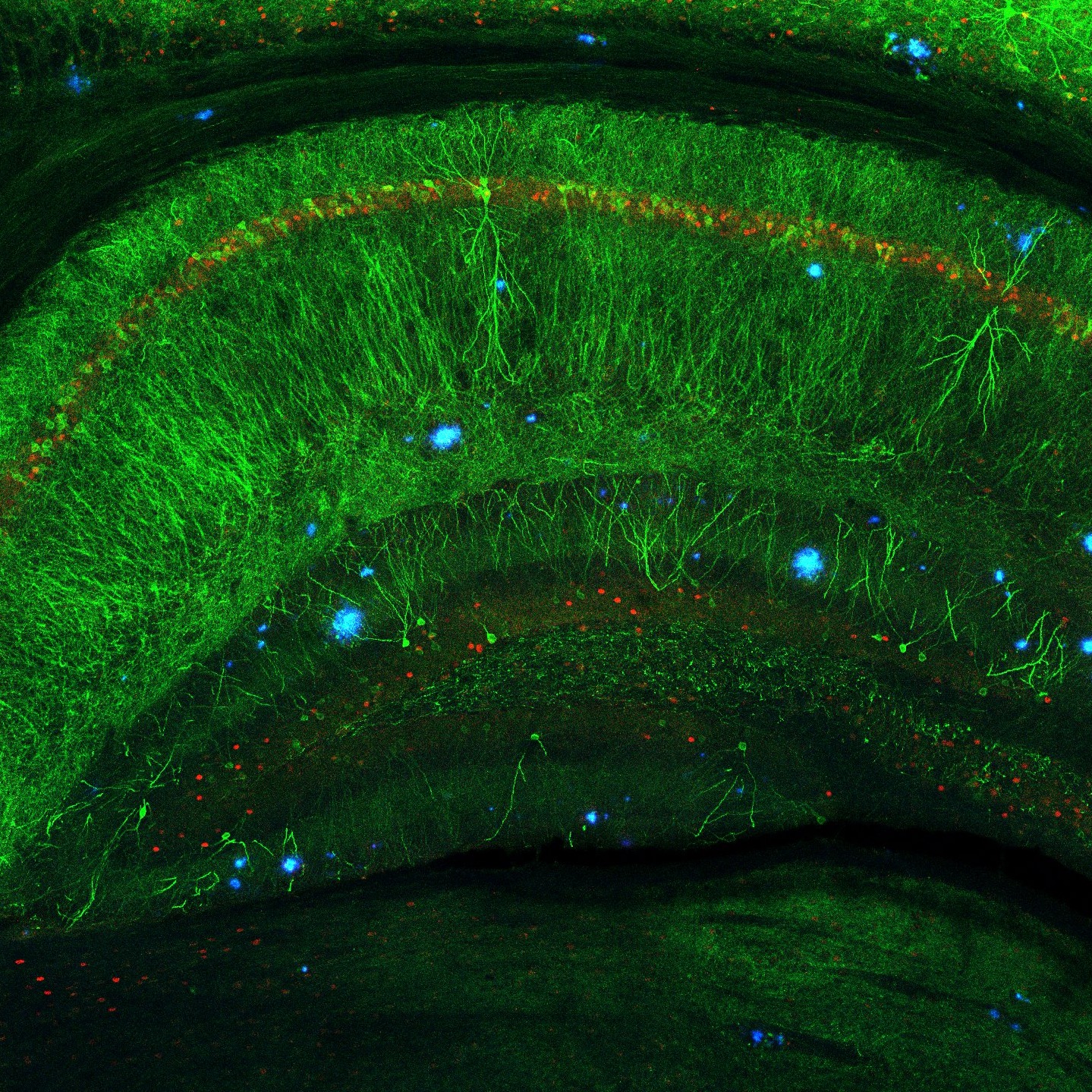 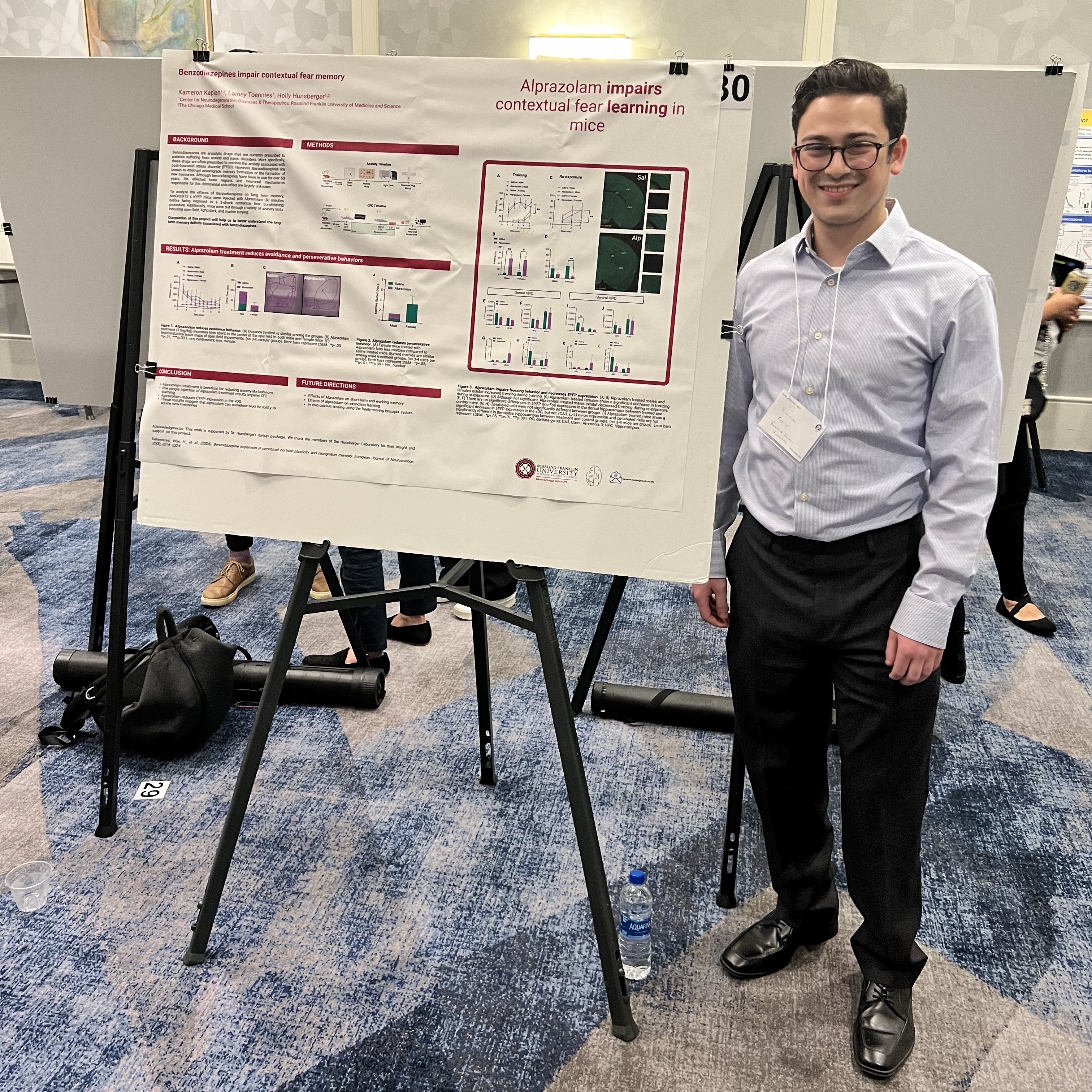 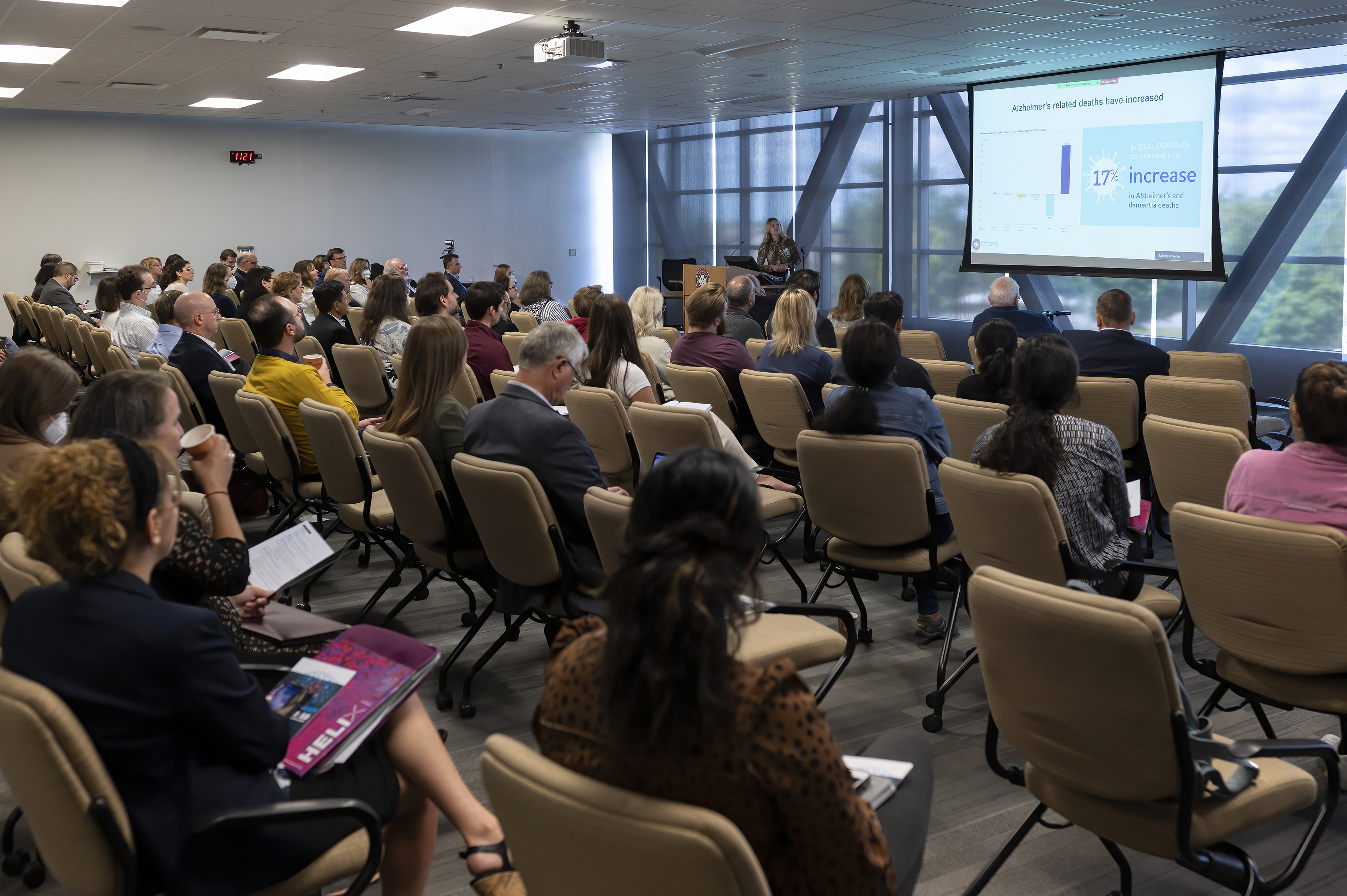 ALTHOUGH WE’VE BEEN STUDYING AD FOR OVER 110 YEARS, WE ARE STILL WITHOUT A CURE.

This is because there is a significant discordance between basic and clinical science. The Hunsberger Alzheimer’s & Aging Laboratory aims to address this translational gap by using transgenic AD rodent models and large human datasets. More specifically we are interested in unraveling sex differences throughout aging and AD with an emphasis on mood disorders. I grew interested in sex differences upon realizing that most AD studies were performed using male rodents even though 2/3rds of AD patients are women. Additionally, 90% of patients with AD also suffer from anxiety or depression. Our long-term goal is to discover early-stage biomarkers and develop personalized therapeutics for men and women suffering from AD.

Divergence in the metabolome between natural aging and AD

Although amyloid plaques and fibrillary tangles are hallmarks of AD, research suggests that pathology associated with AD often begins 20 or more years before symptoms appear. Therefore, it is essential to identify early-stage biomarkers in those at risk for AD and age-related cognitive decline (ARCD) in order to develop preventative treatments. Here, we used an untargeted metabolomics analysis to define system-level alterations following cognitive decline in aged and APP/PS1 (AD) mice. At 6, 12, and 24 months of age, both control (Ctrl) and AD mice were tested in a 3-shock contextual fear conditioning (CFC) paradigm to assess memory decline. AD mice exhibited memory deficits across age and these memory deficits were also seen in naturally aged mice. Prefrontal cortex (PFC), hippocampus (HPC), and spleen were then collected and analyzed for metabolomic alterations. A number of significant pathways were altered between Ctrl and AD mice and naturally aged mice. By identifying systems-level alterations following ARCD and AD, these data could provide insights into disease mechanisms and advance the development of biomarker panels.

The sex-specific impact of anxiety on Alzheimer’s disease progression

Neuropsychiatric disturbances, such as depression and anxiety, are observed in 90% of AD patients and are frequent in those at risk for AD. However, until recently, much of the research narrowly targeted co-morbid depression. Clinical reports have provided evidence that anxiety symptoms predict the conversion to AD, over and beyond the effects of depression, memory loss, and even atrophy. Similarly, epidemiological studies show that neurodegeneration and clinical symptoms occur more rapidly in females once diagnosed. Although most AD studies have been performed using male mice, females represent two-thirds of the AD population and are more susceptible to depression and anxiety. To study how anatomical sex and anxiety impact

AD progression, I used our activity-dependent tagging system, the ArcCreERT2 x channelrhodopsin (ChR2)-EYFP x AD (APP/PS1) mice. These mice allow for brain-wide indelible labeling of neurons activated during learning, which then can be compared with secondary neuronal ensembles activated during memory retrieval. The neurons activated at both time points represent a memory trace or engram. Here, we aimed to identify the neural ensembles linking anxiety and memory loss following AD progression by utilizing behavioral studies, calcium imaging and whole-brain microscopy, in female and male mice. We found: 1) Female AD mice exhibited anxiety-like behavior at an earlier age compared to controls and male mice, 2) AD female mice displayed memory deficits as early as 2 months of age, 3) Anxiety-like behavior correlated with memory impairment only in AD female mice, and 4) Unlike their male counterparts, female AD mice showed a decline in memory traces in the CA3 of the hippocampus. We are currently working to translate these findings to humans using the Alzheimer’s disease neuroimaging initiative (ADNI) dataset. We have found that in humans, anxiety predicts transition to dementia and that anxiety has a sex-specific effect on brain atrophy.

In the face of age-related changes, having cognitive reserve (CR) can buffer against neuropathology and cognitive stressors that often lead to degeneration. Brain maintenance, a compliment of CR, refers to the relative absence of change over time with age. Although there are many variables that affect CR, such as age, IQ, socioeconomic status (SES), and stress, higher levels of education are associated with a lower risk of dementia and widely used as an indicator of CR. These findings suggest that improving education can boost CR to act as a defense against dementia and age-related cognitive decline (ARCD). Therefore, it is essential to understand how environmental changes during aging impact CR on a behavioral and neural level. Many studies of CR have been performed using large human datasets, but this hinders our ability to look at brain changes on the cellular level. Longitudinal animal studies provide a great opportunity to gain further insight into the molecular mechanisms of CR’s impact on ARCD. For example, in the Tg2576 Alzheimer’s disease (AD) mouse model, environmental enrichment (EE) did not have long lasting effects on memory capacity as measured by EEG recordings. However, repeated cognitive stimulation using Morris water maze (MWM) training (heretofore considered a proxy for education) regime for 3 months improved memory performance of the 3xTg-AD mouse model. Despite these results, a majority of research has focused on EE alone and less on a more rigorous form of educational training in mice. Therefore, it is essential that we use education or training as a tool to assess CR in mice.

Here, I examine how education affects CR in a novel mouse model. I will use our activity-dependent memory tagging system, the ArcCreERT2 x EYFP mice. These mice allow for brain-wide indelible labeling of neurons activated during learning, which then can be compared with secondary neuronal ensembles activated during memory retrieval. The neurons activated at both time points represent a memory trace or engram. By determining which areas of the brain are involved in maintaining or enhancing CR, we can better understand how to create lifestyle changes or therapeutics.

Effect of benzodiazepines on memory

Benzodiazepines are anxiolytic drugs that are currently prescribed to patients suffering from anxiety and panic disorders. More specifically, these drugs are often prescribed to combat the anxiety associated with post-traumatic stress disorder (PTSD). However, Benzodiazepines are known to interrupt anterograde memory formation or the formation of new memories. Although benzodiazepines have been in use for over 60 years, the affected brain regions and neuronal mechanisms responsible for this detrimental side-effect are largely unknown. To better understand the long-term memory deficits caused by benzodiazepines, this project aims to analyze neuronal ensemble activation following benzodiazepine injections.

While AD was discovered 110 years ago, there are currently only 4 approved drugs for symptomatic treatment (donepezil, 1997; rivastigmine, 2000; galantamine, 2001; memantine, 2003). As of July 2020, the NIA supports 233 active clinical trials; however, many clinical trials of single drug administration have failed to meet endpoints. The complex pathophysiology of AD may necessitate combinatorial treatments rather than a single drug therapy. Here we aim to target NMDARs and 5-HT4Rs in order to treat neuropsychiatric symptoms and cognitive deficits in AD.

Disruptions in circadian rhythm throughout aging and Alzheimer’s disease (In collaboration with Dr. Christine Denny and Dr. Ryan Logan)

Circadian rhythms are everywhere in living matter from protozoans to human beings. Every cell, organ, and biological system works on an endogenous 24-hour rhythm. However, in patients with AD, this rhythm is dampened. In addition to cognitive decline, many AD patients (~50%) also exhibit agitation and increased anxiety in the evening or nocturnal hours, often referred to as sundowning. Here, we aim to dissect the neural circuitry underlying sleep disturbances, circadian rhythm abnormalities, and increased anxiety-like behavior representing sundowning and how it relates to cognitive decline and AD pathology. We will utilize behavioral assays, optogenetics, whole-brain microscopy, and in vivo Ca2+ imaging. 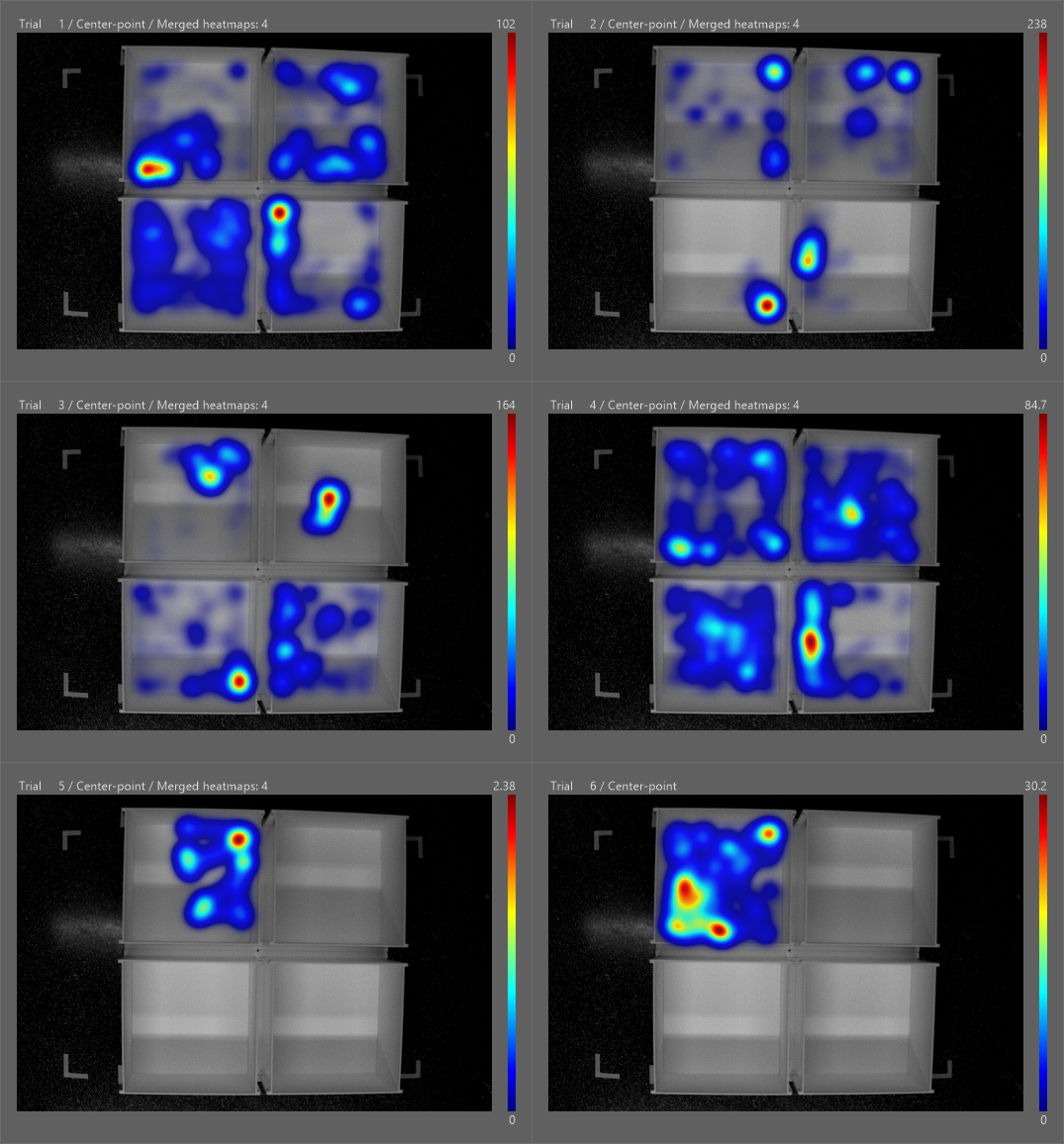 “The major difference between rats and people is that rats learn from experience.” ~ B.F. Skinner

Behavior is fundamental to the Hunsberger Lab. We use a variety of tests to measure avoidance or anxiety behavior, depression, and memory. 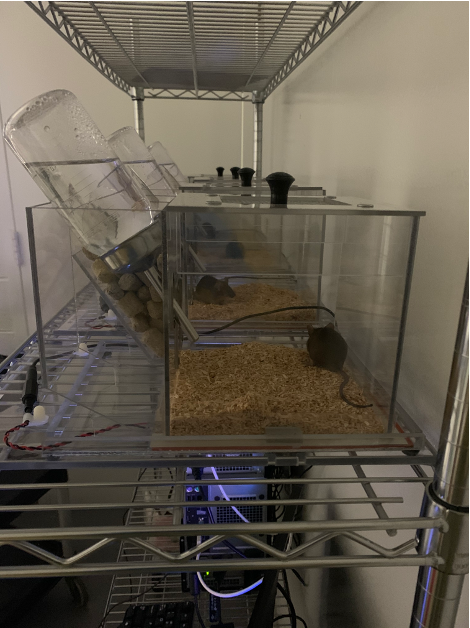 The Piezo sleep system allows us to monitor sleep and wakefulness in mice without invasive procedures. 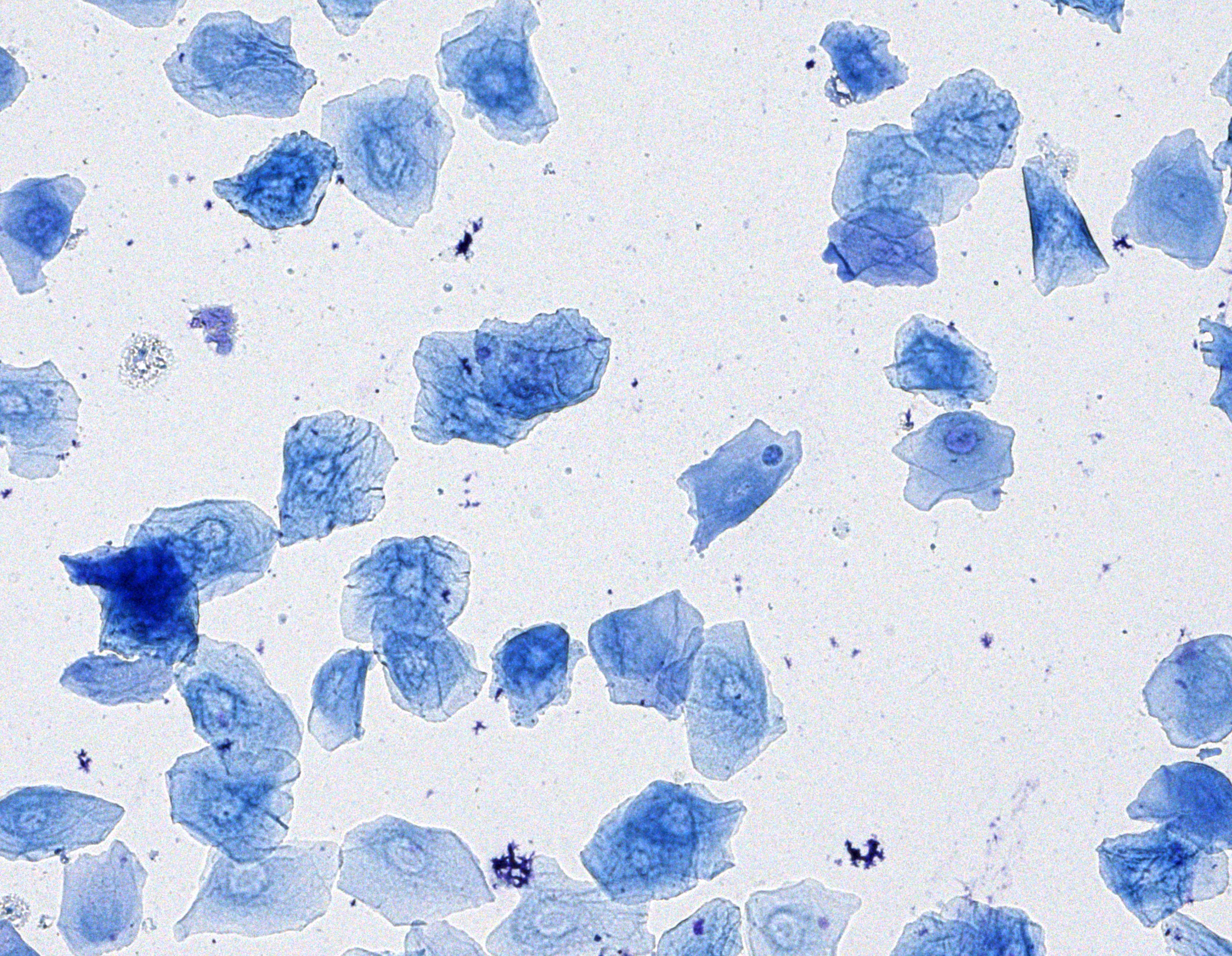 To determine the impact of the estrus cycle on aging and AD, we use an impedance tracker and vaginal cytology to track rodent menstrual cycles. 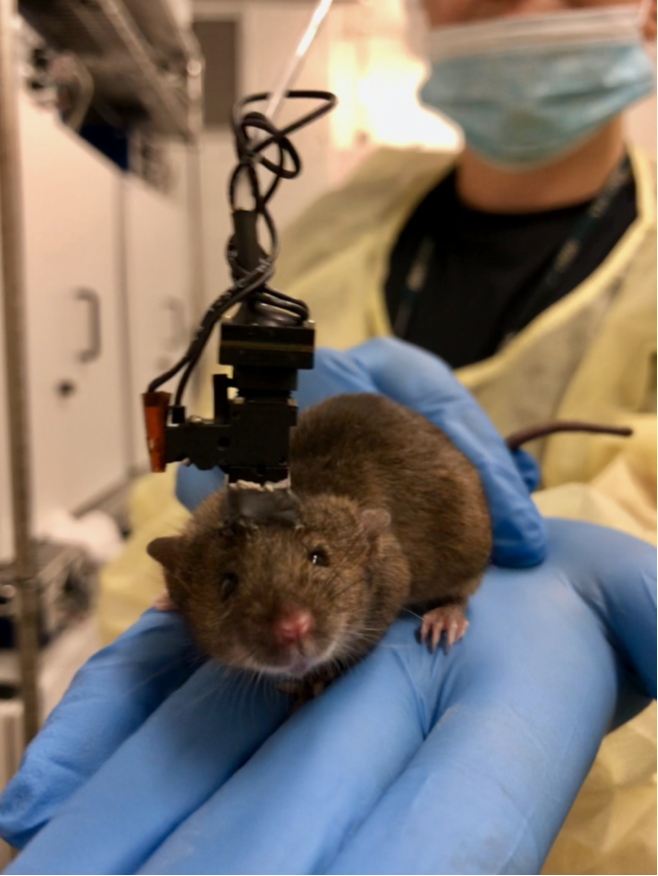 Using the inscopix nVoke miniscopes we can manipulate and visualize cells firing in real time during a behavior or experience. This allows for a dynamic view of the brain which complements our snapshot immunohistochemistry technique. 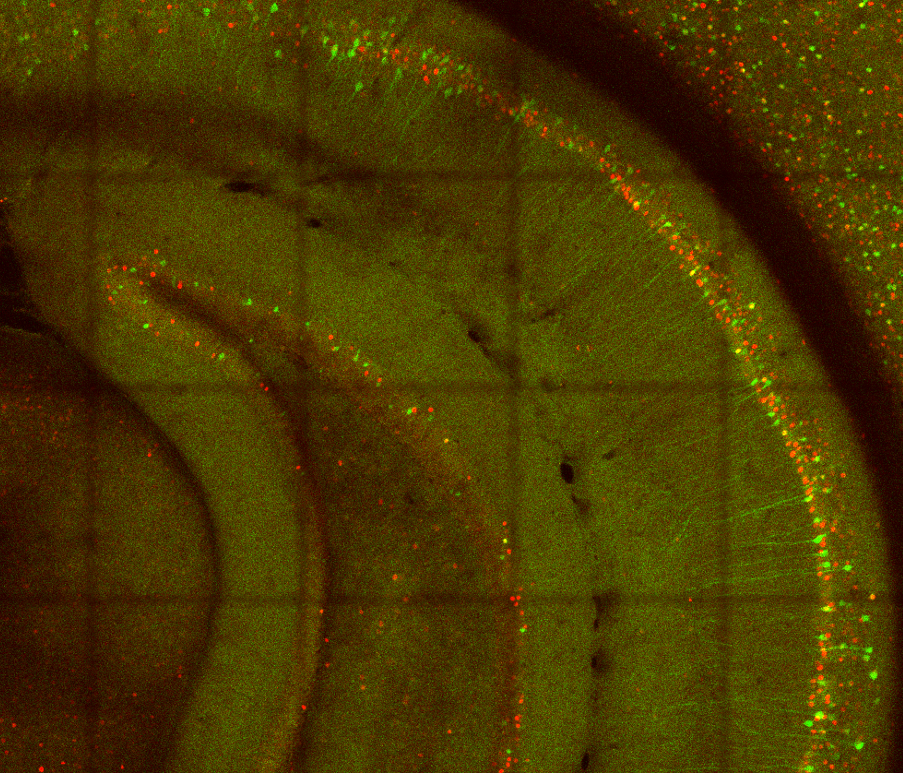 A snapshot of the brain during an experience. Immunohistochemistry allows us to use antibodies with fluorescent markers to tag cells of interest throughout the brain. 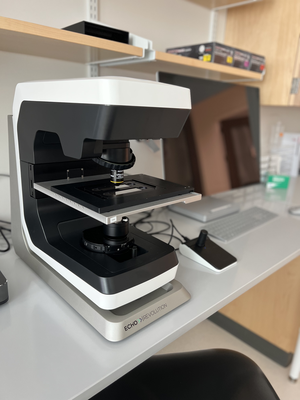 The Echo scope is a novel automated fluorescent microscope that can perform live cell imaging, multi-channel imaging, stitching, z-stacking, auto-focus, and hyperscan. Your eyepiece is a Microsoft surface computer with touch screen capability. 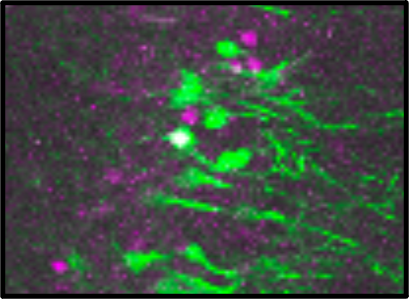 The ArcCreER T2  mice are used to permanently tag activated neurons after an experience (Denny et al., 2014; Root et al., 2014). To achieve both temporal control and flexibility in transgene expression, a CreER T2  system was placed under the control of the Arc gene promoter. in vitro studies have established a requirement for Arc in long-term memory of hippocampus-dependent tasks. This line is unique in that, unlike previous semi-permanent tools, it allows for the permanent tagging of previously active neural ensembles. The ArcCreER T2  mice are bred to an enhanced yellow fluorescent protein (EYFP) line, allowing for indelible EYFP labeling of Arc +  cells after administration of 4-hydroxytamoxifen (4-OHT). Therefore, cells that express Arc +  after an experience will be tagged in green, thus allowing for a comparison between cells that are activated during one experience with those that are activated during a second experience. By crossing the ArcCreER T2  x EYFP mice with the APP/PS1 AD line, we can measure changes in neural circuitry between males and females, across ages, and throughout AD progression.